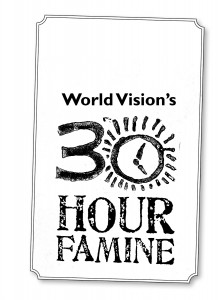 When I first started blogging, a teenaged blogger from my church, Alisha Newton, was gracious enough to show me the ropes with using WordPress.  She has continued to be a faithful reader and encourager of The Poorganic Life. I recently got a letter from her about her involvement with the 30 Hour Famine, and I invited her to guest post about it here since I’m always eager to focus on REAL real food. 🙂  I hope it excites you as much as it does me to hear about teenagers who are throwing off self- absorption and  committing themselves to generosity! Here’s Alisha. First, she’s going to introduce herself, after which she’ll tell you about the 30 Hour Famine.

Shortly after starting high school, I started my blog Unusual Passions to share my encounters with healthy food and running, and to express myself through writing and photography. As a student, however, my life is defined by change and growth; now a junior in high school, I am still a daughter, writer, learner, and follower of Jesus, but I’ve learned that health is a balance of mental, physical, emotional, and spiritual vitality. Maintaining the balance is, incidentally, my biggest struggle as I make my way through the everyday hills and valleys of growing up.

In Zambia, 1 in 2 children will be permanently stunted from lack of nutrition. Afghanistan, Bangladesh, and Mongolia also count as one of many countries in which people go to bed hungry, whether from poverty, war, earthquakes, or drought.

The numbers are staggering. Equally so is the amount Americans spend on losing weight: $60.9 billion in 2009-2010 (1) for diet pills, books, and other weight-loss products.

From Ezekiel 16:49, we can see that history does indeed repeat: “Now this was the sin of your sister Sodom: She and her daughters were arrogant, overfed and unconcerned; they did not help the poor and needy” (NIV). It’s not hard to draw comparisons between the damned Sodom and the “beautiful land” (the Chinese translation of “America”).

This is the global picture of a conflict I experienced on a personal scale a couple years ago. Caught up in myself—devastated if one of my life’s trophies lost its gleam of perfection—I cared little for the concerns of my family, friends, and global society. It was miserable to base my value on myself, because I am innately, humanly sinful. When I eventually broke out of my own self-imposed iron bars, the world seemed bright and new, and its real problems overwhelming.

Wanting to participate in any activity that served an end greater than myself, I spent time on a summer mission trip, co-led a Bible study for middle school girls, became more involved at my youth group, and read books about being a zealous Christian.

I found freedom in losing my identity in something beyond myself, ie. God’s Kingdom. But as a teenager learning about hunger in particular, I felt powerless against the rising tide of hunger. I have only prayers and free time.

Enter World Visions’ 30-Hour Famine. World Vision is “a Christian humanitarian organization dedicated to working with children, families, and their communities worldwide to reach their full potential by tackling the causes of poverty and injustice” (2). The Famine, started in 1992, has raised over $100 million for World Vision’s global aid and development programs.

Last year I participated for the first time with my youth group; we raised over $8,000. (Just $30 is enough to help feed and care for a child for one month.) We spent the weekend serving the local community and praying, and will do the same this year. (Watch for the ‘After’ post later in February.)

It was a powerful experience to feel in my own body the problem of hunger, even for just 30 hours. That night, my youth group and I were in kinship with the one billion people who go to bed hungry every night—but for us, it was just one night. The 30-Hour Famine is an opportunity for teenagers to make a difference and work together, and it inspires passion in young hearts for social justice, but the responsibility to take action starts now and with every capable individual.

If you’d like to help overcome hunger, donate online at http://support.worldvision.org/goto/JAARSFamineNewton.

Wow, is anyone else inspired and convicted by Alisha’s words “I found freedom in losing my identity in something beyond myself.”  Whether or not you chose to donate, will you leave an encouraging comment for Alisha? Also, will you pray for the 30 Hour Famine?