If you are a relatively new reader of this blog, you may be interested to know that we only started Eating Poorganically in August 2011.  I changed the name of the blog from “The Low Ryder” to “The Poorganic Life” in October.  Lately, I’ve thought it might be helpful to review a few of the earlier posts in my “research” about food to help us all as we figure out what it means to eat poorganically.  The post below is from August 11, 2011. I’ll include updates from now, January 2012, in BLUE.

I’ve spent the last few days inundating myself with information about organic and healthy eating, so that I could become totally overwhelmed, despair, eat ice cream, try to convert The Funny Sister (which is impossible), and annoy everyone by telling them everything I’ve learned. She is converted!! I can hardly believe the words I am typing. Oddly, I think she is stricter than me in her eating. In other news, the fat lady sang and hell is experiencing record cold temperatures.


After hours of late nights, reading NON-FICTION, which is the worst kind of reading on the planet (irony-anyone? ;)), I’ve finally decided to stop and summarize my findings for your reading pleasure. Surely, I have left out CRUCIAL information, so please note it in the comments. This is a long post and only for those who want to learn about Eating Poorganically, so get out your notetaker . . .

Those of you who are Newbie-Organic-Skeptics like me, if you want more info about any of these, I can refer you to a brilliant Organic-eater-reader, smarter than I. Once you have read through this deluge of organics, we can all determine what we are going to do–whether that be yawn and call out for a pizza, or freak out and light fire to our pantry and all the Hamburger Helper therein.

I am going to try to make this easy by focusing on the “problems” that organic eating is purported to solve. I am explaining the problems as expressed in the vast quantity of articles I read. I will link where relevant. This is not MY OPINION or PROVEN by studies that I’ve seen necessarily. I am just passing it along as I read it. I am making up the acronym GET SAD PiG to help me remember these. Maybe that will help you too?

Beginning in the mid-nineties, a major food company Monsanto, genetically modified several key crops to make them resistant to the application of the weed killer Round-up, which Monsanto also produces. (Just to clarify, Monsanto is pretty much “THE BAD GUY” in these stories if you are looking for your villian.)

Despite the fact that no human safety trials were conducted and NO OTHER COUNTRIES (except Canada) approved genetically modified crops, the FDA approved these foods for introduction into our food supply. This 18 minute video is a pretty concise explanation. (Editorial note: I found her dramatic pauses a little annoying.) Now, much of the US supply of corn, soybeans, canola, cottonseed (also called rapeseed), sugar beets, most Hawaiian Pineapple, some Zucchini and Squash are genetically modified crops that are not required to be labeled. Many allergies and illnesses that have increased since the mid-nineties are presumed to be linked to the introduction of these foods into our food supply. There is a lot more to say about this, but the gist is, these GM foods (not General Mills, but genetically modified foods) are bad news. Here’s a non-GMO shopping guide that I found.  Organic food is non-GMO, so conventional products that are typically made from GMO are the only ones where I typically opt for organic.  Otherwise, I often buy conventional.

This is where all the “Whole Grain” business that we’ve heard so much about comes in. Basically, the husky part of the grain is awesome for us, but when you take it off, you are left with the deliciously useless white flour that has to be “enriched” with fake versions of all the nutrients that they lost with the husky part. Apparently, the enrichment is actually just fake crap, put in to make up for what they took out (apparently). Ridiculous. White flour, while not as evil as Monsanto, is apparently quite close. Lots of good articles are out on whole grains, but here is one from 100 Days of Real Food with pictures of the labels that you should look for. Organic breads or homemade breads are the winners. I know. Blast, blast, blast. I was hoping I could avoid that “homemade” information. On a hopeful note, however, it does not sound like there is too much genetically modified wheat sold in the food supply yet, so that is a minor “win,” I guess.  I’m just now looking into information about soaking grains. Apparently, pure whole grains ought to be soaked, but if you are occasionally having white flour, it’s not the end of the world. 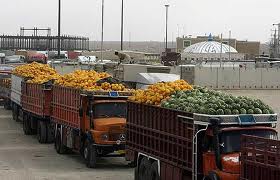 Long distances of travel are bad for food because of pollution in the environment by vehicles. Also produce that is shipped is not as fresh and is sometimes artificially ripened. (Think of tasteless, mealy, February tomato.) Buy local. The closer your food was grown to you, the better. If you can talk to the farmer, you can ask questions about your food. Maybe it is grown organically, or close to it. Sometimes local farmers are not paying the government to be “Certified Organic,” but the food may be organic in fact, if not in name. My vote is that washing the pesticide off a local peach following the instructions of my Peach Lady Nancy (who grows peaches down the road in Lancaster) is way better than buying a lame-o organic California peach and having it travel all the way across the country. Plus Nancy’s peaches are $10 a basket and taste like love. Dare to eat a peach folks.

While crops are being genetically modified, animals (cows, chicken, pigs are the ones I’ve read about) are being given steroids and hormones to makes them milkier and eggier and porkier. These steroids and hormones do not make them healthier, just fatter, etc. This is not good either. Again, the proof is a little ambiguous (because evil Monsanto prevents studies and sues people who try to make them look bad–think big evil, corporate guy), but the assumption of the Organic Foodies is that what is bad for the animals, is bad for the humans that eat the animals. For a reference, I point you to this somewhat strange link (a guy’s Facebook notes). But this was actually an easy to read article. I have since learned that the FDA prohibits the use of steroids and hormones in chickens and pigs. Some are skeptical that the FDA actually enforces this. Skeptics point to the enormousness of US chicken breasts as evidence. Cows can be given steroids. Much of US meat is injected with saline. My conclusion has been to avoid injected and processed meats, but not necessarily opt for producers claiming “NO HORMONES” in chicken since that is an unnecessary claim on par with “VERY CHICKENY.”

Animals who are on steroids (and cramped living spaces) get sick a lot, so they are routinely given antibiotics in their food. Those antibiotics are found residually in the animal products milk, eggs, and meat. The antibiotics are also presumed/ somewhat proven to make their way into humans and possibly cause antibiotic tolerances and other health problems from consuming antibiotics excessively. Opting for organic/pastured meats and animal products will eliminate the risk of antibiotics. When it is cost effective, I chose this option. Also, we have decreased our overall meat intake. 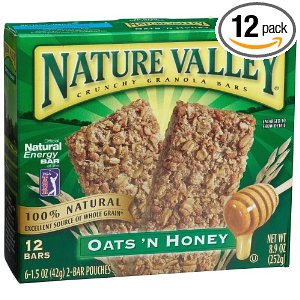 
Back to plants. (These may seem slightly out of order, but I’m trying to work my acronym, so I had to spread out the vowels, etc.) Those GMO (genetically modified organism) foods, especially corn and soy, are made into countless ingredients (corn syrup, fructose, sugars, sweeteners, oils, soy lecithin, soy milk, xanthum gum, malodextrin, etc.) that are used as preservatives, thickeners, flavoring agents, and sweeteners in TONS and TONS of food items, even minimally processed ones or “natural” ones. Thus, in an attempt to avoid GMO foods, many Organic foodies also just avoid any processed foods because processed organic food (wherein all the components are organic) are quite expensive AND not necessarily healthy. (Think organic non-GMO cookie. Still a cookie.) Avoiding processed food is the MAIN thing we have done as poorganics in spite of being pretty lax on the other rules. 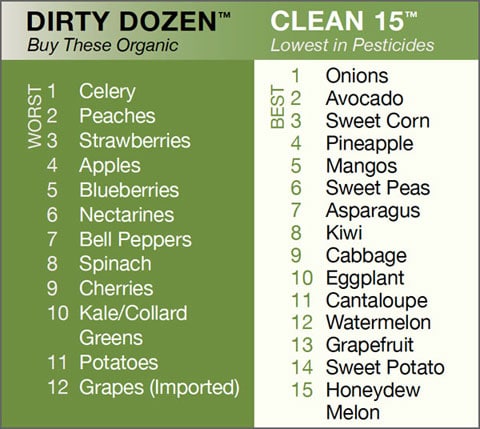 Lots of fruits, vegetables, and grains are sprayed to kill or keep away insects. These pesticides are presumed and in some cases proven to be bad for people to eat. Despite washing, some foods retain pesticides due to waxing or pesticides leaching into surrounding soils. This cheat sheet, published by the Environmental Working Group, lists which are the “Dirty Dozen” (most pesticide retaining) or the “Clean 15” (least pesticide retaining), and you can find a more complete list if you check out this link.  In Nov 2011, I wrote this post where I talked about my poorganic determinations on pesticides for months when the “garden” was closed.

Back to animals. (Recall, my really important mnemonic acronym GETSADPiG? We must maintain it.) The animals, who should be romping about in the beautiful pastoral land in Iowa, or Ohio, or where ever they romp, are instead inside a barn eating GMO corn feed instead of grass, which God designed them to eat (apparently). This makes them fat, but sad (apparently) and then they get sick and need anti-biotics, etc. Thus, even if you avoid eating the GMO plants directly, and you avoid the evil derivatives, you might still get residual GMO corn in your grain fattened meat. Also, there was much ado about “inhumane” treatment of animals; however, (PETA people go away to some other website–this one is not for you) I don’t care if my meat is not treated like a human. I just want it to be healthy and yummy, so that is my only concern. I’m not a cat-kicker; I just don’t think animals are humans.  I try to opt for grass-fed or pastured meats when I have the option and can afford it.

THAT’S ALL!!! You’ve heard my GETSADPiG

Does anybody have any questions? Another great way to follow this discussion is by joining The Poorganic Life Facebook page. You guys are already doing a great job helping out with questions and comments for those of us just figuring out if Eating Poorganically is “worth it.”

Just a little reminder so that I don’t go insane repeating this, poorganic is not organic. I don’t eat all organic food. I look at what organic real foodies eat, and I adapt it to what we can afford on a public school teacher’s salary, and what I can make without buying appliances like wheat grinders and Vitamix blenders.

Here’s a little reward video for those of you who stuck in with me till the end. (If you know what a major hip-hop wannabe I am, you know how much I LOVE this. :))

8 thoughts on “GET SAD PiG Recap”