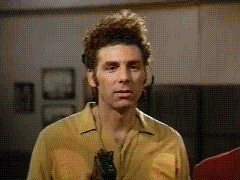 When I was in college, one of my professors was, I am 99% sure, the love child of Sybill Trelawney and Cosmo Kramer from Seinfeld.  If you are an Asbury alum, you can attest to the truth of what I say.

He was willowy and tall with curly, slightly wild dark hair– though “dark” was a Just for Men variation on crow black, purple, or a rusty maroon intended to conceal his ambiguous age.

You see, he’d married a younger woman, a student no less, so he was thereby compelled to maintain his youthful look.  (We scandalized it, but though she had been younger, she was a fully grown woman who had come  back to school later.  Had we thought about it, it would have made a lovely romance. )

He would sweep into class, either very late or extremely early, in which case, he would glower imperiously at us for not being there sooner.  My first class with him was Romanticism, a seminar where we all sat around a large conference table.  He seemed awkward in this environment, eye to eye with his students, casually paging over Emma and Mary Wollstonecraft.

He was also my adviser at this time.  Despite having met with him on several occasions, he always perused my file as if we were meeting for the first time.  Distant and busy, he read my file with boredom until he read that I was from North Carolina.  Then instantly, he would puff up, beaming. He’d graduated from Chapel Hill in the late 60s, a distinction which, at that time, told me nothing.  Later on, I realized this elite credential belonged to a sort of mad genius that doesn’t normally find themselves at Christian liberal arts colleges.  From the moment he discovered my Tarheel origins, we were comrades of the Carolinas. He happily signed off on whatever I wanted to take and then forgot me entirely until the following semester.

After four semesters of this I confess; I switched advisers.

It wasn’t until later on, in Brit Lit II,  that I got to see him in his element, standing with the impassioned ballet-like bow and stretch of the gymnastic lecturer.  For William Blake he would rise, up up up on his tiptoes, bellowing out in a sing-song voice.  But for James Joyce he would lean out over the wooden podium dangerously far, whispering  low, and then smiling conspiratorially in a truly creepy way.

On the margin of my notes, I scribbled to my neighbor, “Do you think he might be crazy?”

I then inclined my eyes and pointed my head to the front of the room.  My classmate wrote, “Yes to both, I think.”

My bias against my teacher no doubt came from the fact that I was never of one mind with the British novelists, I admit.  Then and now, I was keen for the Americans.  (I am a Yankee Doodle Dandy . . . born on the fourth of July, in fact.) My favorite American lit professor was just the sort of bearded and tweed-clad man that you want to have expounding to you on James while absentmindedly stirring his keys in his pocket. My quintessentially somber American lit professor had been what I expected, tame and studious and wry.  But this caricature of a British lit professor who claimed Coleridge plagiarized and Rossetti exploded, he was too strange.

Nonetheless, due to my need to take Modern Poetry for graduation, I had to endure one more semester with this mysterious Romantic.  In the spring of my final college semester, he really flabbergasted us by coming in, not only late, but absolutely exuberant, positively jolly (;-)).

He’d been spending hours in his garden. Talking to no one in particular, he breathlessly glowed on about the warmth of the sunshine and the feel of the fuzzy newborn tomato plants.  He started giggling in an intoxicated way, letting his voice become falsetto as it did when spoke dreamily.  He sang out, “I just love to wriggle my toes down deep deep into the earth!! Oh the fecundity of our world!”

I admit to eye rolling. I admit to thinking he was an old loser quack of epic proportions. I admit to thinking that it was naught but that valuable paper from UNC that was keeping him gainfully employed. I admit to raising my hand and asking in a respectfully snotty voice what “fecundity” meant just to bring him down from the heights of his manic earth-love. But it didn’t work. He rambled on about the fertility of God’s creation and the pleasure we derive from witnessing that creativity and growth. I’m sure I eye rolled again.

Aren’t 21 year olds just the stupidest bunch? I sure do hate that old girl some times. She was quite contrary to who I am today. Let’s all roll our eyes at her!

Many times in the spring and summer, I have, in a fit of anxiety, left my wild bunch of children inside, fleeing outside to water my thirsty plants.

Pull a few pieces of crabgrass.

Pinch off a bean.

Wind the stems of my tomatoes through the trellis.

Smell the honeysuckle and the hot spicy basil smell just dripping down in the humid air.

And I think of my teacher singing out about his toes in the earth.  I think of his passion for literature, and poetry, his garden, and his Creator.

He was right. The world is a beautiful place, shared with us by our Creator.  Just a few seconds out in my garden agonizing over this or that bug, broken branch, or wilty leaf, reminds me of His great joyous love for us.

My teacher is retired now. I hope he will let his artificially burgundy hair grow out into a wild white puff.   I hope he can spent all day tending his garden, sipping mint juleps, and reading Auden or Wordsworth, while his younger wife brings home the bacon.  And even though I’d like to finish off by saying that upon reflection, I think he was a fabulous and successful teacher, I hope he never reads this post.

Happy Summer! Happy hot lovely life-giving summer! (Did I mention that I typed this post on my back porch in the 93 degrees? I did.)

5 thoughts on “Quite Contrary”