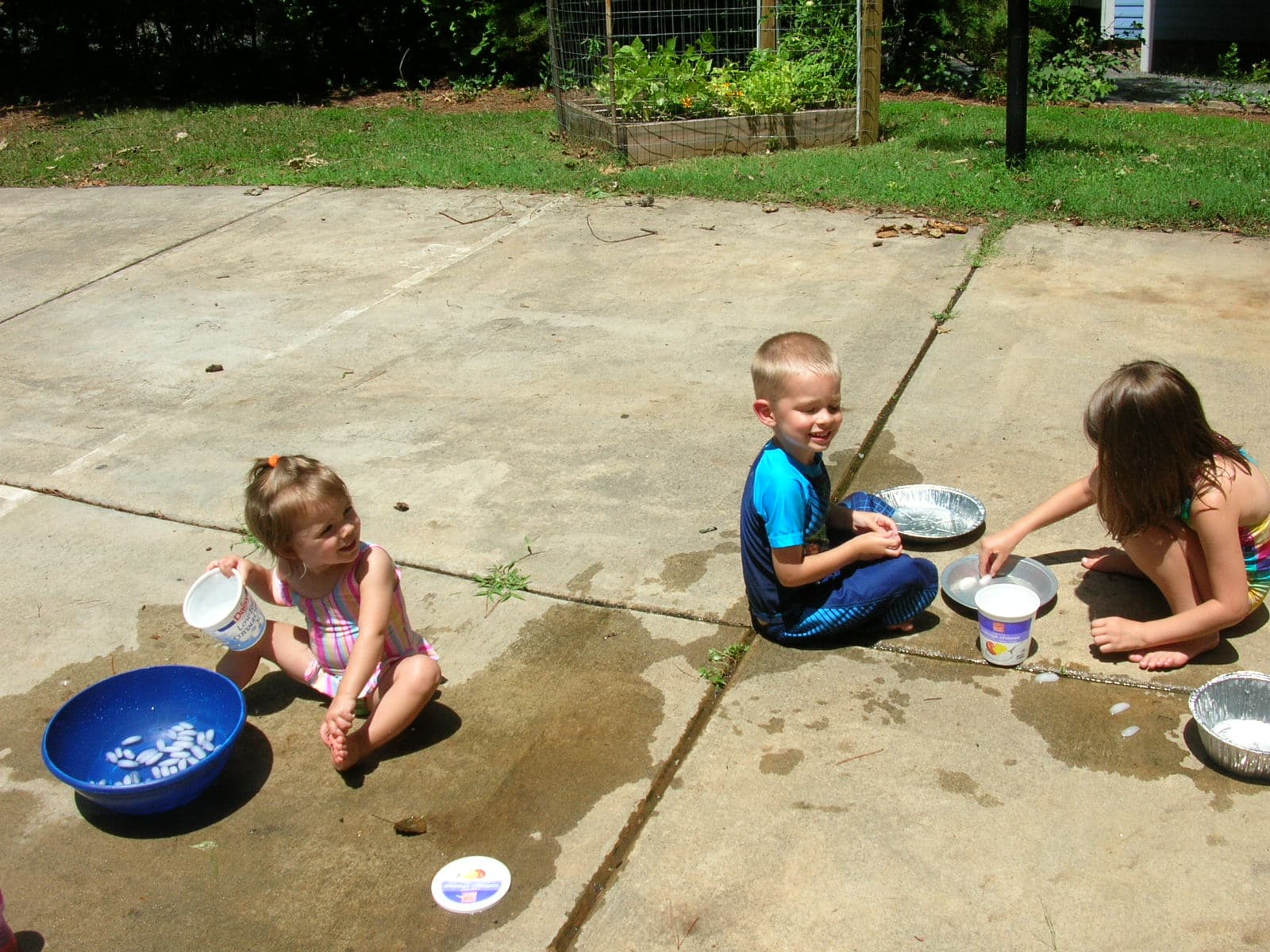 Here’s the summary of last week . . .our first week of Summer Program.

Monday: Craft Day. We did not do a craft. We cleaned up from the beach, BUT we did have some friends come over so that provided a nice distraction.  J had lessons pretty much all day.  He has almost a full day of lessons on Mondays so that will be good for us.

Tuesday: Movie Day. J took the bigguns to Madagascar 2 while I stayed home with Anika and cleaned. It was a very productive, successful day.

Wednesday: Water Day. We set up the blow up pool, the little pool, the water guns, the ice trays, you name a water related activity, we did it. The kids DEFINITELY had a blast. We ate lunch in the garage and just had a great time.

Thursday: We ended up making it FFLEX Day since I had several errands, including another Super Doubles Trip.  The kids watched a ton of TV and generally got a bit stir-crazy.

Friday: Field Trip Day.  We went to Ikea to get some frying pans and new juice glasses since ours had bit the dust.  We ate in the IKEA cafeteria (meatballs-yum) and then dropped the big kids in Smaland for an hour while we shopped.  Thanks to having a very small and specific list, we got out of there without being totally fleeced.  On the way back through Charlotte, we stopped at a park to meet up with a college friend of mine who has just moved here with her husband.  Thunder clouds crept in and so we dashed back to their house for a picnic around their dinner table where we watched quite a ferocious hailstorm. SCARY. But reconnecting and hanging out with them was very fun.

Saturday: Yardwork, another Super Doubles, marathons of Phineas and Ferb (which I do not feel guilty about), and a trip to the Farmers’ Market.  Honestly, by Saturday, we were all getting very testy with one another. (On a side note, Addie actually has her first celebrity crush on Phineas and drew him a Valentine with a drawing of his little triangle shaped head.  Ah, so sweet. At least he has a strong sense of irony . . . .)

This leads me to yesterday.

Sunday: Horrific SON-DAY. DYLAN WAS A HOLY TERROR OF EPIC PROPORTIONS. I won’t go into the details too much since they involve him biting, kicking, scratching, screaming, and laughing at me while I drug him first from a movie theater (wherein I pulled him into a dark corner and whapped his bare hiney) and second from a pool.

Why did we persist in taking such a devil-child to these fun things? Because our glorious friend invited us and paid for us and we never say no to such invites. PLUS, Addie was being angelic, so how can we really follow through on the threat to “LEAVE IF YOU DO ONE MORE THING!” when that would just devastate the good child.  Grrr. Parenting sucks. It is a good thing that he is adorable when he is so wicked.  It is a lifesaver for him.

Since other parents’ devastating misery is the best medicine for your own, I will share with you one more tidbit from the day.  After finally strapping Heinous Screamer to his seat and driving from the theater to arrive at the pool, we realized Addie had taken the birthday card she handmade for our friend with gift cards inside into the theater and left it under her seat.  BLAST!!! SO, since J was unwilling . . . I returned to the theater, went inside with my ticket stub, begged the manager with my pathetic story, asked a lady if she minded if I crawled around on the floor under her butt, found the abandoned card amidst masses of popcorn centuries old, deschtuck my knees from candied floor, and returned to pool party where manic Dylan had cooled and bobbed happily with both wings and vest protecting him from my wrath.)  Of course, when bobbing had to come to an end we went through the punching and kicking routine again, while he shouted “BAD MAMMA!! I’M MAD AT YOU!” at the top of his lungs.

When we got home, well, I will just say, we did not spoil the child. One of my mother’s mottoes that I have found to be true is “There’s nothing like a spank to sweeten’ em right up.”  Amen.  That little dude was sweet as beach tea today.  Speaking of which . . .

It is with great delight that I report that my friend, who is an ANGEL STRAIGHT FROM HEAVEN, has invited Addie and me to join her and her daughters at the beach for two days and two nights.  (If the grammar of that last sentence bothers you, all I have to say is OBJECTIVE CASE BABY . . .look it up!)

Upon the morrow, on the wings of my 2000 Taurus Wagon will I fly, fly, fly away from this lovely, albeit slightly overcrowded home, leaving J with the delightful littluns he helped create. I have informed him there is no bread in the cupboard.  He was worried that 23 diapers would not be enough for Anika, but I told him that he should be fine unless she got dysentery or had dozens of huge blowouts, which I thought was unlikely.  Nonetheless, I told him where the extra sheets for her crib were in case that happened.  He accused me of smirking when I said “dysentery” and “blowout”.  I maintain that my smile was unrelated to the idea of him elbow-up in poo.

Whether I will blog from thence, I cannot say. I may be transported far beyond the plain of average life.  We plan to beach and watch BBC movies until our eyes bulge.  I’ve heard of people blogging in advance, but that is contrary to my last minute approach to inspiration. So upon that note, Adieu dear readers. Adieu.

P.S. Pray for my dear sweet husband who strongly encouraged me to go on this vacation because he is awesome, omnipresent in our family, and the best man I know. Also, pray no one gets dysentery.

2 thoughts on “Spare the Rod”