I’ll make this quick. If I can. For those burning with curiosity about my garden and its progress, here is some info.

After the scalping, I placed the tomatoes on little rolling carts that J’s school was ditching. Every night, I tucked them into the garage so they couldn’t be munched by vicious deer. When we went to the beach in June, I had my mom or a friend come every night and every morning and roll them in and out of the garage.

Then when we went on our vacation in July, I thought, I’m going to try them on the screened in back porch. It isn’t as sunny as the yard, but they’ll do okay for a few days.  Big beef, I left in the driveway because he is pretty caged at this point and he turned out to produce thick skinned yellow tomatoes anyway, so I don’t know what his deal is.  But the cherry tomatoes, I put on the porch. 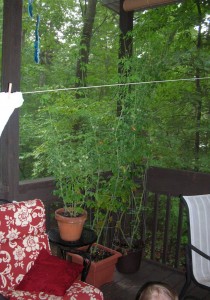 Well, I’ve been lazy and have not moved them back outside. They are doing okay on the porch, but are not as prolific as they’d be if I’d put them back out front. BUT, they are insanely tall now, so it is a bit cumbersome to move them.  And I’ve been lazy, did I mention?  So, the other day I was thinking about moving them.

It crossed my mind. It was about four in the afternoon and I had just barely processed the thought when I heard J say, “Honey, come look!”

And here is what we saw in our front yard. 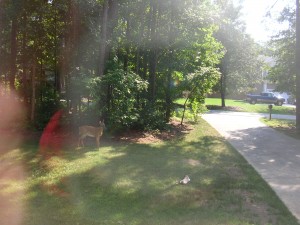 Maybe you didn’t catch that since I’m standing inside the living room and there is a glare from the window. Here’s another. 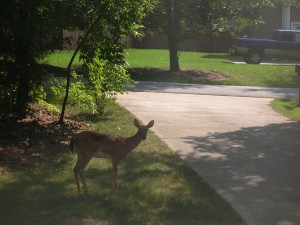 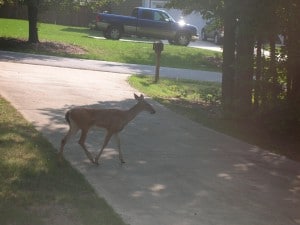 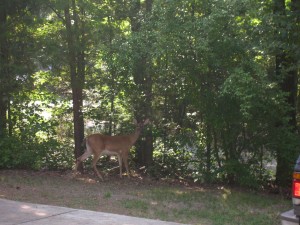 Lest you think that I’m getting so many shots because I have the world’s fastest camera or something, our camera has about a 30 second delay in addition to having to manually separate the “auto-open” lens in any kind of humidity.  So I went outside, walked straight over to him and . . .thirty seconds later . . 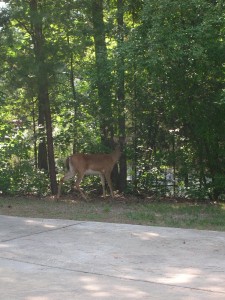 Oh yeah, that’s right. He just stared at me. So I started yelling at him. “GET OUT OF MY YARD!” 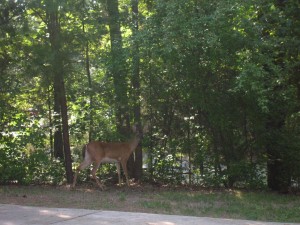 “What? Look lady, don’t get all bent out of shape. The other deer told me that you guys had some tomatoes . . . Is that not right?”

So I chased him out of our yard. Now, get this. She had two choices. Big wooded area behind me

Go up the neighbor’s driveway, cross the street, and through the lawn into a neighborhood. Hmmmm . . . 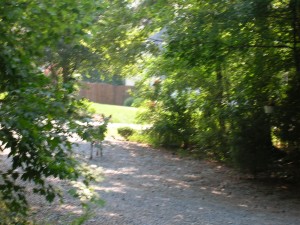 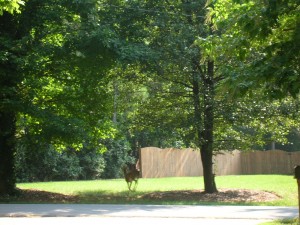 Across the street and into the lawn of the neighborhood. 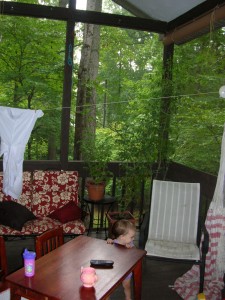