(This story is unedited and includes notes to myself for future changes.) 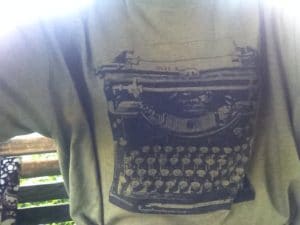 At Sam’s Memorial Service, his friends took all his old T-shirts and laid them out over the edges of the table.  There were old school soccer T-shirts, Jerseys from different national soccer teams, The Haircuts of Mao Ze Tzung, camoflauge T-shirts worn so thin as to be transparent (the horror!) and many other examples of a witty and loyal person, too present in his own life to part with so much as a T-shirt, not to mention this Earth entirely.

At the end of the service, we cleaned up and packed away the photos and memorabilia, threw away the remnants of a reception so abundant only missionaries could have provided it, and finally looked at each other with the pained expression of people unwilling to admit, even by the slightest gesture, that Sam’s service, Sam’s life, Sam himself, was over.  And then, I’m not sure who, said, “Does anybody want a T-shirt?”

We awkwardly shuffled over to laugh and peruse, most of us hesitant to be the first one to claim any bit of him as ours.  Sam was a bachelor, who at 40, was killed on his motorcycle while driving to Bible study. He’d grown up a missionary kid in Colombia, careening through the jungles on a dirt bike and swathing paths through foliage with a machete. When I met him in high school, he was handsome and funny and engaging. Barrel chested and stocky, he seemed larger than life, and yet, he was somehow unassuming and casual. He read constantly, seemed to have memorized the lines from hundreds of movies, and was often teasing and flirting with his admirers. Yet, he was brilliant in an unassuming way that challenged everyone and lorded over no one.

Once, I cannot remember the circumstances, we were participating in some sort of lock-in or late night celebration at school which culminated in a game of Trivial Pursuit with our principal. Sam’s stocky, hairy and happy-go-lucky manner contrasted sharply with Dr. Davis, who was tiny, neat, and confident in his eventual success. As the game progressed, those of us on Sam’s team, and really ALL the teams, began to gather around to watch him, with a twinkle in his eye, merrily trounce everyone, including our principal.  He easily answered EVERY single answer that was presented to him, laughing and even pretending to think for a few seconds on some of the answers.  We all marveled at this mild, funny genius who without the slightest appearance of competitiveness, just knew everything.

After graduating from college, he worked in various jobs as a Spanish translator, winning over friends with his wit, his loyalty, and his enthusiasm. Before the accident, he lived in a room in his cousin’s house, books stacked floor to ceiling, ever absorbing knowledge. He had no children of his own, but loved teaching 4th grade boys Sunday school, and loyally led games for a decade at an AWANA program so inc. He went to trivia night with friends, traveled, and planned to take an adventure back to Colombia with his childhood best friend. They would revisit their old stomping grounds and remember the glory days.

Just 10 days before the trip, a young driving turning left at a green light, failed to see his motorcycle which had the right of way. She turned into him and he was killed.

Should his family keep his old T-shirts? Should his best friend take them? Was it just too weird to split up a collection curated by a man who, bear-like in size, saved a clearly-too-small shirt bearing our Middle school mascot, the Parkwood Bears. Too sentimental (or maybe lazy) to part with something he once valued, too affable to resist any irony or tease that might get a smile, and too down to earth to value cloth less practical than jersey cotton, these T-shirts were a Sam-sized reflection of a friend whom we all want to keep near our hearts. (more about the T-shirts from Mike and how they reflected him . . . .

Is it weird to have a dead person’s clothes? Is it tasteless? Is it disrespectful? Are we weirdly graverobbing instead of sensibly donating it all to Goodwill where each piece can find a new home with a like-minded stranger who doesn’t have to feel a twinge of sadness with each touch of cotton?

I don’t know. In the end, I’d rather this small bit of legacy remaining connected among his far flung friends who knew him, who laughed with him, and who could see his crazy manic glee at being a human billboard of awesome humor. I think so because I took two.

I took an olive green shirt with a picture of a typewriter out of which a paper is visible bearing the letters “Ctrl Z.”

As a writer, I liked the old-fashioned typewriter and the idea it evoked of creativity. I liked that the Ctrl Z was so futile and so hilarious and so permanent. Because while Ctrl Z might mean “undo” on word processor, erasing the last action instantly, it’s absolutely useless on a typewriter. Each keystroke will last, but to no end. So maybe it’s nihilistic that I took a shirt about futility from my friend who died.

Unless, that is, it’s not just a shirt about futility, but rather Sam’s shirt, which means it is certainly about irony, and humor, and knowing how to take a joke—even a philosophical one. Because while maybe typing Ctrl Z doesn’t have the result on a typewriter that it does on a computer, it’s not that it has no effect at all. The letters are still there, making me smile and saying, “Keep going. Just do it. Write. You can’t go back. You can’t undo. Just live.”

Sam’s shirt reminds me its irrepressible owner, laughing and pursuing adventure to the end, being a friend, a teacher, a reader, and a traveler. Maybe it is weird that I wore the shirt the whole time I wrote this, but you can’t Ctrl Z now.