Since our electricity just came back on after an outage, tonight’s post will be brief.  I’m going to share with you a little game I like to play called “On this Day in History” with the photos stored on my computer.  Here’s how it works.  I look through our files for a picture taken on this date at some point in the past.  Before I go to bed, I post it as the wall paper on our desktop.  When J wakes up in the morning, we have a nice little chortle about the past and what was going on.  Ah, memories . . 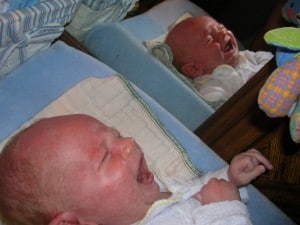 Well, I’ve chosen to fudge the dates by one day because I found this, from 2007. Dylan was not quite one month old. This photo is called “Colick.”

There are not actually two babies.  He is laying in front of a mirror.  It sure felt like there were 10 of him though.

He had colick for about four months.  Those were arguably the worst and longest four months of my life.  Everyone told me that it wouldn’t last forever.

But they were also wrong.

If you have a baby with colick, e-mail and tell me. I will pray for you.

Seriously, your sanity may be on the line. 🙂 (Also do not read further in this post if you are currently dealing with a colicky baby or else you will want to stab first yourself and then me . . . if such a thing were possible.)

And so, with the delicious probability of sleeping a solid eight hours

(until I wake to my son shouting “WIPE! WIPE! from the toilet)