(Scene: ALL–I repeat–ALL of my family is asleep and I am on our screened in porch with an ice tea enjoying the 91 degrees and 60 percent humidity. Yes, I love heat. No, I am not delusional from it. They are really and truly ALL asleep . . . shhhhh.)

(To those of you who are saying to yourselves “She only likes heat because she hasn’t. . .” By way of reply, yes, I have driven a car with no AC –for over a YEAR; I have lived in a tropical country; ; and yes, I have slept in the jungle in a mosquito invested village with no fan. I am not saying that I loved the latter, but I do like heat–otherwise, wouldn’t I go inside?)

Since a primary reason for this blog is to keep me sane and intellectually functional, I must exercise some of the feeble remains of my literary knowledge in our next lesson on cheapness. But it won’t be like McTeague. This time, poetry.

The metaphysical poets like John Donne commonly used a conceit in their poetry. A conceit is a very strained, elaborate, even strange, comparison between two things that would normally NEVER be compared. For example, in one of Donne’s poems, he compares his unchanging love for a woman to a compass that is used for drawing a circle. In another he compares himself to a flea that bites his love and she summarily squashes. Normally these are not images that we associate with love and lovers, but if you read the poems (which I cannot require, but I strongly encourage you to do ), you will see that these comparisons not only work, but they are that much stronger because of their strangeness.

Ergo, I, Katrina am a ninja. (As a metaphysical conceit, that is.)


“What?!” you ask. Most of you know me and would argue that I am not very ninja-esque. (It should be a word, so I’ve created it.) I am a peace loving middle child. I am a people pleaser. I do not like discomfort. I do not like embarrassment. I do not like unrest.

I appease. I ingratiate. I mediate. I withdraw.

(Draw eyebrows together and assume sinister expression. ) But do I?

In January of 2007, J, Addie and I lived in Papua New Guinea (in the South Pacific above Australia). I was pregnant with Dylan. We were due to return to the US at the end of March. We lived on a missionary center and did not have a car; therefore, we did not go off the center very often. During the school break that year, we were invited to go into the closest town to do a little shopping with a van-full of women and girls who thought that J’s uber-masculine presence* in the vehicle might deter bandits (called raskols there-pronounced like rascal). As I was in need of a new laundry basket and some unmissionaried air, we went along.

After a morning of used clothes shopping, the teens had spent their money on the western clothing sent up from Australia and I’d acquired my desired basket. Though normally I would never have let Addie sit in the front with J (since there really aren’t even carseats and she wasn’t yet two), I was very weary and a bit sick from being pregnant and inundated with odors that only PNG townlife can deliver. So I sat in the back furthest from the sliding door and he and Addie sat on the passenger side (which just to help those that need accuracy, was the left side since this is PNG).

I will stop belaboring. On the way back to our center at a dip in the road where the van was sluggish, a number of raskols with guns and bushknives (think machete) jumped out and began shooting at us.

Now we had been prepared that in this type of not entirely uncommon situation, we should give them whatever they wanted and protect ourselves at all cost. People had definitely been hurt in encounters with raskols. Men were told to carry an extra “fake” wallet to give them. But in this situation, we really did not have any money, having spent it all on clothes that were sure to disappoint. All I had was a half zipped backpack diaper bag with a dirty diaper that had spilled out onto the floor. Then there was my laundry basket with some clothespins and toddler outfits inside. In the front, J was holding Addie on his lap with her Elmo from the second hand store. The raskols opened the doors and began waving the knives in our faces and hoisting out our bags and purchases.

Perhaps it was because Addie was safely in the front.

Perhaps it was pregnancy hormones.

Perhaps it was seeing them wave a bushknife in husband and baby daughter’s sweet Elmo loving face.

Perhaps my inner cheapness just rose up to the surface and transformed me.

But honestly, so help him, when that raskol grabbed onto my laundry basket . . .I grabbed the other side and played tug-of-war with him like it was my dearest possession. Because nobody . . . I mean nobody . . . I mean nobody is going to take my laundry basket full of absolutely useless things away from me without a fight. I put a death grip on that basket and jerked back and forth with a crazed (probably stoned) man who had a massive knife in his hand. As a missionary, I did not stop to consider his desperation, his poverty, or his maniacal look.


I am not saying that it wasn’t stupid to do that. The sane thing would have been to sweetly hand that basket right over, filled with Kina (currency), and a toia (change) on top.

But when the adrenaline started coursing through my veins, who knew?

I mean, who knew that I would mysteriously transform into the FIGHTING CHEAPNESS NINJA, struggling to the last for what is mine, even if it only cost me three dollars.


And not only that, once the raskols had pulled all the bags out and were trying to open the back hatch, our driver started to pull away while the sliding door was still open. The handle of my basket broke and the raskol drug it out with him. (ARGHH–I know, right? You thought I would win the fight for the basket? Didn’t you?  But focus on the fact that we broke the basket in the struggle. I did not let go!) The raskol with the gun in the back started shooting at the van and, of course, then I became sane and ducked my head and cowered in fear, right?

NO, I THREW THE WADED UP DIRTY DIAPER OUT THE DOOR OF THE VAN AT THAT BASKET STEALING JERK!

Because, of course, that would show him!


I hear you saying, “No, she would never do that. That is just crazy. She would never to something so ninja-esque.” (See you are saying it now, so it must be a real word.)

Then in a huge squeal of tires and dust, we peeled away into the sunset. Actually, it was more like a glug and a lurch and AAARRRUUMMM (KER-CLUNK, gear shift extrememly old van) MMMPHHH.


It’s true. I seem docile and peace loving, but I revealed to myself in that moment that when presented with fight or flight–gall darnit–I fight.

I am so cheap that I’ll fight for a laundry basket. By day, I might just be a stay at home mom cloaked in a drab wrapping of coupons, cloth diapers, and gardening, but the truth is that, metaphysically speaking, I’m a ninja, skilled and trained, poised and ready to strike with my dirty diaper held high, my baby child clutching her second hand toy, and an overworked van lurching its way wearily home.

So what is the lesson here? Do not misunderstand the transforming power of cheapness. Be hesitant when you say, “Well, I’m not so cheap that I’d . . “ You just might surprise yourself. Also, if you intend to follow this blog, I want you to have a clear understanding of the extent of both my skill and madness.

Also, you need to remember the definition of a conceit and come up with your own conceit about yourself to post in the comments section. 🙂 (Sorry, inner teacher coming out; I cannot resist giving an assignment.)


*This story is in no way designed to reflect upon the masculinity of my husband, who was Adonis-like in the front seat, and kept Addie and Elmo safe all the while. Had he not been protecting Addie and Elmo, surely the raskols would have been left thrashed and beaten within an inch of their lives, failing in their effort to rob us of our second-hand teen clothes and laundry implements. 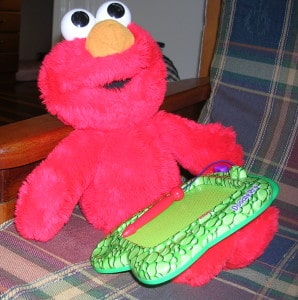 5 thoughts on “Raskols, Ninjas, Elmo, and the Metaphysical Conceit”