I’m VERY excited to share  another of my dad’s stories from Raising Homemade Disciples.   In his first post, I let my dad tell a glowing story about me and NOW, because I’m nothing if not fair, I’m going to let him share a truly horrifying epoch of bad behavior about MY BROTHER, Shane. HA! (What can I say? I endured a bit of torment as a middle child, so this is my sisterly payback.)  🙂  This story approaches the realm of LEGEND in my home.  SO BAD is the behavior of my brother than nothing–almost nothing–comes close to this parenting and discipline story.   HERE’S DAD!

Every family probably has a story that comes to mind when the topic of catastrophic misbehavior comes up. Maybe you even have one per child. But our train-stopper is clearly fixed for all times in everyone’s memory …

Our son, the first-born and obvious forerunner in all things hazardous, was about eleven. He and a friend became bored one day at the beginning of summer, and wandered into a vacant split-level house across the street. As they roamed around upstairs, they had a great idea: they’d plug the upper-level bathtub, start the water running, shut the door quickly behind them, and then come back later for a swim! These were two intelligent boys, so their logic doesn’t add up, but figure in lots of idle boy mischief and you’ll understand. Anyway, they left the house, got busy playing something else and forgot all about it.

After bedtime prayers, lights out and doors closed, we heard sobbing coming from his room. Judy went in to check on him, and came out a few minutes later without a full explanation, but at least all was quiet. Not for long though. The sobbing resumed a second and then a third time. Finally he spilled the whole story. When I realized the implications, I got him up and we marched across the street in our boots with a flashlight, braced for some sloshing.

We couldn’t have imagined what twelve hours times four-gallons-per-minute would do inside a house. As we entered the lower level, water was streaming from all the light fixtures, and the sheetrock walls felt like gooey bread dough. We slogged up the stairs and turned off the water. Silently we squished our way home and somehow I got him settled and asleep. As his door clicked behind me, my face told Judy the whole story. I knew it could spell financial ruin for us – I couldn’t begin to guess the damage throughout the house.

After talking through it with Shane the next morning and assessing the situation, Judy’s profound insight amazed me as we identified three elements of the offense:

But the most crucial issue was clarified by Judy’s insightful question to him:

“Was there any point along the way when you knew it was wrong to be doing what you were doing?

”Without hesitation he said, “Oh, yes!”

“Shane, that little voice was God’s spirit in you, warning you of trouble ahead. He does that to protect you. You must learn to listen and obey whenever that happens.”

So we listed the third and most serious aspect of his actions:

To deal with a three-fold offense, we designed a three-pronged discipline:

When we finally saw the owner of the house come by a few weeks later, Shane and I hurried over for The Moment of Truth. I’d coached Shane on the wording of his statement to the man:

“I’m very sorry for the damage we did to your property. I realize we were destructive and irresponsible. I take complete responsibility for my wrong actions, and I want to offer to do whatever I can to pay for the damages.”

The owner’s reply was amazing. “Young man, if you had passed it off as no big deal and assumed that I could afford to cover it, I would have held your feet to the fire for every dime. But because you’ve taken full responsibility and offered to do whatever you could to make it right, I’ll accept your offer to help around the yard, and we’ll call it even.”

The lasting impact of this event – for all of us – wouldn’t have happened if Judy and I had done the natural thing – flip out and go crazy with loud, angry, hurtful words and bizarre, irrelevant punishment. By taking time to get things in perspective – God’s perspective – and respond according to His values and goals for Shane’s life, we were able to present God’s character in a powerful way.

OPTIONAL: You’ll notice the absence of any physical punishment in this tale, commonly known around our house as “The Flood Story”. It’s not that I don’t believe in paddling or spanking – because it’s clearly prescribed in God’s list of tools for the job[1]. A week later Shane WAS spanked for being blatantly disrespectful to the lifeguard at a neighborhood pool and being asked to leave! My gentle wife was far angrier about this incident than the foolishness of The Flood.

YOUR COMMITMENT     With God’s help, I will learn to step back, breathe deeply and take time to ask God for HIS wisdom instead of allowing my natural instincts, especially anger, frustration or impatience, to take over.

PRAYER       Help me, Lord, to be alert to examples of Your discipline of Your children in the Word so that I can learn to better demonstrate the fruits of Your Spirit – self control, gentleness, patience and kindness – as I guide and equip my children to serve and honor You. I need great discernment from You to see what is at the root of their offense or disobedience. Help me to apply the appropriate discipline for each one that will bring glory to you and strengthen our relationship in the process. 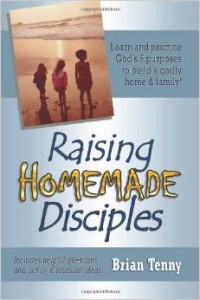 The above story is taken from Raising Homemade Disciples by Brian Tenny, available in print or Kindle editions at Amazon.com

Wowsers! While I hope that my kids never pull a Flood Story prank, I do hope that my parenting demonstrates the wisdom that my own parents have shown. Do you have any great discipline strategies? Share them in comments below.

Also, congrats to Rebecca Sarine who won the free paperback copy of the book. for sharing last week’s post.

I think we’ll do ANOTHER paperback giveaway for this post! Share this post on FB or by email, leave a comment below, and you’ll be entered in a drawing to win a paperback copy of the book. Don’t forget to leave a review once you’ve read it.  🙂