You might not know this about me, but I’m a little bit cynical.  The other day when I posted about wanting to raise $500 for a little boy in the Philippines to go to school, I was secretly dreading having to keep nagging you about it for days and weeks on end because I just didn’t really think you would do it. I mean, I thought you would eventually, but I didn’t BELIEVE you would. 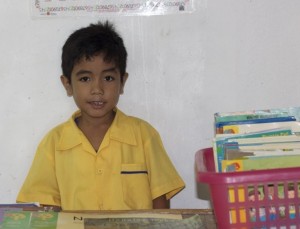 20 hours. That’s all it took. In 20 hours, the readers of this blog raised $500 for a little Filipino boy to go to school for a year.  In fact, after the $500 was raised, YOU KEPT GIVING beyond the goal to help the other kids at the school.  I increased the goal to $600 because, heck, I suppose there are other children we can help, right. Click here to do so. $5 bucks a reader is all I suggested, but y’all clearly don’t play when it comes to giving.

Want to hear one of the many cool things about this? I didn’t actually give to particular project monetarily because we are out of money for the time being.  I know, you are probably thinking that isn’t cool at all.  YET when I looked at the list of people who gave, I noticed that several of the people who gave were people we’ve given to in the past for one thing or another.

And that’s how it works, folks.  Giving is contagious. And addictive. And satisfying.  Once you see the miracle does HE DOES with HIS money when you unclench that stony fist, it just seems silly  to pretend it’s yours, hanging onto it, socking it away, and worrying that it won’t be enough. Instead you Give, and HE Gives, and THEY GIVE, like a blossoming of the most beautiful organic, sustainable, life giving, family, or even more connected than a family.  WE ARE ONE BODY. We are HIS BODY.

(Imagine clever transition here. I could not think of one.)

I actually found the words “real food” in the Bible.  And it was Jesus who talked about it. It is actually RIGHT AFTER the passage I talked about in 7 for the Good Girl.  It is in John 6:35-69.  Basically, the disciples and other Jews are hung up on the miracle where Jesus multiplied the bread for thousands of people.  They are getting down right obsessive about what he means when he claims to be the “bread of heaven” and and asserts that who ever has this bread won’t be hungry. He is comparing himself to manna, God’s physical, actual, tangible provision of food to the Israelites.  But he is saying that HE (not edible food) is better than bread (actual food.)

They think it is weird that he calls himself bread, suggesting He is food, and heavenly food at that. (Just pretend some guy from your church started saying this and you’re almost there.)

But just as they are grumbling on that, he says, “For my flesh is real food and my blood is real drink.”

Okay, stop and think.  Pretend you are Jewish and can only eat kosher. Beyond that, you are ANCIENT Jewish, where the food rules are longer than the best list Michael Pollan can come up with.  Cannibalism is probably out. You know, eating people. Drinking blood. That’s pretty grody, right?!  I mean, I know a lot of you Twilight readers have been dreaming of your burning and planning out your vegetarian life with Edward, but still, you probably weren’t really dwelling on that bloody part, right?

Likewise, in verse 60, many of his disciples (followers beyond the 12 main ones) said, “This is a hard teaching. Who can accept it?” I think that is code for, “GROSS. Jesus, you are sick, man.”

But being patient in a way only God can be, Jesus perseveres with his teaching.

61 Aware that his disciples were grumbling about this, Jesus said to them, “Does this offend you?

Um, yes. Can you just stick to the hard facts, Jesus? Can you just tell us what the immortal bread-food is?  No more metaphors please. So he says:

62 Then what if you see the Son of Man ascend to where he was before! 63 The Spirit gives life; the flesh counts for nothing. The words I have spoken to you—they are full of the Spirit and life.

But I think a lot of us still want it to be easier, less spiritual. We want there to be actual, tangible, edible substances that will insure our lives, our health, our immortality.

66 From this time many of his disciples turned back and no longer followed him.

And this is the part that makes me sad and broken up inside, thinking about Jesus watching disciples walk away and choose real food over REAL FOOD.

68 Simon Peter answered him, “Lord, to whom shall we go? You have the words of eternal life. 69 We have come to believe and to know that you are the Holy One of God.”

Well said St. Peter. I think there is a job in your future. There really is NO WHERE else to go for real, REAL FOOD.

What, pray tell, does this have to do with Christian and fundraising and real food?

If you believe that REAL FOOD is Christ, then you are part of a HIS BODY. His body CRAVES real, REAL FOOD. And Jesus tells us, in John 4:34 My food . . . is to do the will of him who sent me and to finish his work.

Seeing what we, Christ’s body here on Earth, did for that one sweet boy, Christian, made me feel FULL. So full. So satisfied and nourished and complete and emboldened.  It reminded me of why I love to live this crazy teeter-totter of generosity.  Giving in Jesus’ name, doing HIS work, and sharing with orphans FEEDS US.  It enables HIS BODY to grow, to live, to thrive, and to continue. That’s how HE IS GLORIFIED in us and how we become content.

That, my friends, is The Poorganic Life.

(We can still talk about little “r” real food too though because that’s the kind He likes to multiply. ;))