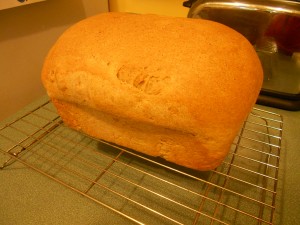 I’ve had a lot of questions about bread since I posted a conversation about how to judge the “poorganic-ness” of your bread.  It includes information about homemade and store bought breads.  I HAVE been trying to make bread more often, and now that I’ve incorporated it into my week, it isn’t as much of a hassle.  I do have a bread machine that I use for the mixing and rising, but it is old and bakes into a hard brick lump, so I don’t use the bread machine for that part.

This recipe is one I’ve adapted and had great success using as sandwich bread.  Click the title to print the recipe. 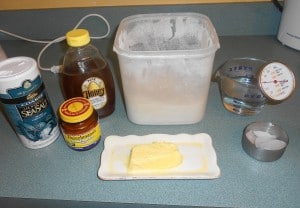 1/8 cup vital wheat gluten (if you don’t have this, you could use all purpose flour and a crushed Vitamin C tablet)

1 ½ Tbsp milk powder or whey (from off your yogurt)

Optional Soaking your flour: If you want to try soaking your flour, combine the flours, 1 cup of the water, and the whey,  12 to 24 hours before making the bread. It will make kind of a gunky thick dough. After 12-24 hours, proceed with the normal instructions. I am new to soaking, but I will say the bread did turn out VERY well.

With a breadmaker: Place ingredients in bread maker in the order directed by the manufacturer.  Select the dough cyle. (Watch to make sure that you don’t need to throw in a tablespoon or two more flour to keep it from being sticky.) 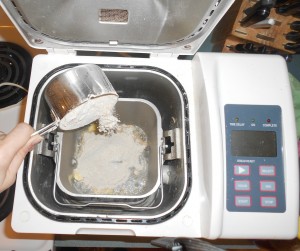 By hand: Mix dry ingredients except for yeast.  Proof the yeast in the water and then add the other liquids. Add flours gradually, mixing until dough comes into a ball. Knead for 5-10 minutes, adding the minimum amount of flour to keep from sticking.  Allow to rise in a greased or floured bowl until double. Then punch down, adding a little flour if sticky. 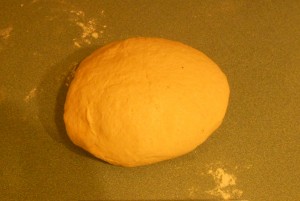 Second Rise: After the first rise, place in a greased loaf pan for a second rise. I let mine sit on the oven for about an hour while it preheats to 350. (I know this wastes heat, but in the winter, I allow it. J. In the summer, just place the loaf pan on the steaming hot back porch table.) 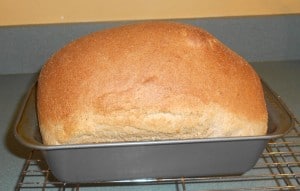 Cooling and cutting: The bread should be golden brown when you remove it and make a slightly hollow sound when thumped.  After removing the bread from the oven, spread 2 Tbs butter over the crust to prevent it from being too crusty. As soon as you can, loosen the bread from the loaf pan, and transfer to a cooling rack for 4 HOURS.  Torture yourself by not cutting into the bread until then. Slice with an electric knife. (If you try to cut the bread too soon, it will tear and crumb everywhere.) 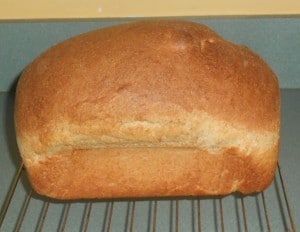 After slicing, keep the number of slices you need for each day in the cupboard. Put in a plastic bag or plastic wrap and freeze the remaining slices. Remove and thaw when you need them.  Because this bread doesn’t have preservatives, it doesn’t last in your cupboard for more than three days.

Let me know what you think.  Also, making bread is kind of finicky, so don’t give up if your first or fourth loaf turns out differently. Just stick with it. 🙂

I’m linking up this recipe with a bunch of other yummy ones at Comfy in the Kitchen!