(This post was delayed one day because when we returned from the beach, our phone and internet were down. Alas!  Therefore, you will have to indulge my belated posting.) 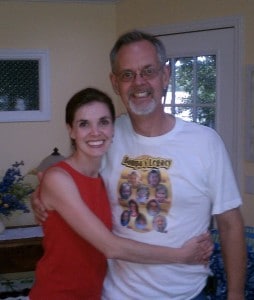 When I sat down to write a Father’s Day post for my dad, I didn’t have an overarching theme like I did when I wrote my Mother’s Day post.  There are so many different memories crowding to the front of my mind, begging to be shared, demanding to be told.  In light of this random thinking, I am going to resort to my list-mode to organize.  This is a long post, without a lot of pictures because sadly, my Dad was often the camera man.   Also, there were these other two goofy kids in most of the pictures I found!  What’s a middle child to do!?  (I have made a deliberate effort to start taking individual pictures of my kids with J.)  Today I had this picture taken with my Dad, a great man who I hope you’ll take the time to read about.

Things I Love About my Dad

1. My Dad is a writer. From my earliest memory, my Dad has been writing poems, stories, and letters.  Whenever we needed a cleverly turned phrase or a poem on the spur of the moment, my Dad could craft a rhyme with a second’s notice.  Sorting through a heap of miscellaneous old papers the other day, I found a letter dated October 12, 1996, exactly 6 years prior to my wedding. The date caught my eye, so I read the letter, curious to see what was happening all those years earlier.  During my tumultuous and emotional first semester of college, my dad wrote it, encouraging me and challenging me.  I found several more letters behind it, one as recent as this Christmas.  I don’t know if loves are hereditary, but if I inherited my love of books from my mom, it is my Dad who has made me want to plunk away at the keyboard, getting my words out. (I’m not going to devote a whole paragraph to it, but my dad is also a heck of a grammarian. While I have lost my skill at grammar, I still have an enthusiasm for it.)

2. My Dad is a teacher. Because both my husband’s parents were teachers and his sister is too, it wasn’t too much of a surprise that he chose that career.  However, my inspiration to teach came from a little bit more unconventional kind of modeling. While my Dad never made a profession of teaching, he made a lifestyle of passing along knowledge and wisdom, not just in his letters. When we were kids, he created these “Wisdom Builder Coupons” that he assigned point values. He would reward us for demonstrating good behavior by giving us the coupons. After we accumulated enough points, we could redeem them for a reward.  He read to us from books like Cheaper By the Dozen and The Autobiography of F.W. Woolworth, obviously admiring the ingenuity and inventiveness demonstrated by these men.  MANY nights around the dinner table he read Keys for Kids devotion lessons to us, encouraging discussion and questions.  Before my sister and I were married (not to each other–separately 🙂 ), he encouraged us to watch a video series on marriage with our fiances. You can see on his shirt in the photo it says, “Bompa’s Legacy” and has a picture of ten of his eleven grandchildren.  There is no doubt that his (Bompa’s) legacy is not only the children, but the teaching we’ve all received from him over the years.

3. My Dad is a deliberate parent. If there is any one thing about my dad that I want to take into my parenting, it is that he was persistently and deliberately involved in our lives. He was never passive, assuming we would absorb lessons by osmosis.  He was constantly concocting ways for us to be together as a family, whether or not we delighted in the “forced family fun.”  If he let a teachable moment pass by, I never knew about it.  When we were all in elementary school, he sat us all down at the dining room table and laid out a pack of cigarettes, telling us that if we were curious and wanted to try them, this was our chance; he wouldn’t be mad or upset.  After that, if he ever caught us smoking, he’d make us eat an entire pack of cigarettes. (He’d called poison control and found that it wouldn’t kill us; just make us very sick.  Just what he wanted.)  He didn’t shy away from awkward moments, telling me as a teenager my outfits were too immodest and would have “done a number” on him when he was a teenage boy.  Icckkk!!!  After I finished dry heaving, of course, I immediately went up and changed at the utter skeeviness of my dad mentioning being a randy teenage boy.  He “interviewed” many of my prospective dates, and even kept J sufficiently nervous despite the fact that we were both adults when we met.    There were many times when I heard of friends whose parents were easily deceived or shoved out of the loop.  My Dad was neither of those things.  He was deliberately involved, present, and concerned.

4. My Dad loves my mom. I don’t know what happened to the plaque, but for much of my childhood my dad displayed a little sign that read, “The most important thing a father can do for his children is to love their mother.”*  My Dad loves my mom. He always wants to kiss her. I constantly feared entering the kitchen and seeing something GROSS. He wrote her notes and cards. He took her on dates. He often compliments her cooking, her clothes, her hair. He seems constantly thrilled with her and gives off the general vibe of adoration. It is totally sickening. 😉  Sure, they fought. I heard them arguing, getting tense, avoiding each other.  But I never, never, never thought for one second that they would split up.  The security that I had as a child was undeniably grounded in the fact that my dad loved my mom. He made an effort to show his love for her. They worked at their marriage, but they built a foundation that made a big difference.

5. My Dad is emotional. I am not sorry to say that I have been crying for several paragraphs now. I’m pretty sure, Dad, that you could probably summon a tugboat with the honking and nose-blowing that is already going on.  When I was a kid, my Dad’s mom would carry a significant number of Kleenex in her cleavage, just on the chance that she might tear up over something sweet or sad.  This quality (not the cleavage) is apparently being passed on.  My Dad is a crier.  I’m a crier. (Sorry Dad. Cat’s out of the bag.) He’s also a melancholic and has a flair for the dramatic. Every Christmas he reads these stories in which there is some last minute phenomenon which brings out all the tears and choking.  There were many occasions where in the midst of receiving a lecture about something wrong I’d done, he’d tear up, talking about how I’d grieved him. “OH NO!! Dad, seriously, beat me with a whip, but please don’t CRY!!”  Despite this amazing example of open-emotions, it took me many years to realize that emotions are not just weak, girly, and mood centered.  God gave us our emotions as a way of helping us express.  Hooray Dad!

6. My Dad loves Jesus. My Dad loves God. He loves His Word.  I cannot think of a morning in which I have not seen my Dad reading God’s Word, studying, and praying for God to teach him.  The image of him bent over his Bible is one of my earliest and most cherished memories.  At 30 he became a missionary and drove us across the country to California to the missions headquarters when we were 2, 4, and 6. (This is not meant to be evidence of insanity, but devotion.) Then we drove back east when we were 4, 6, and 8–a two week trip!  He has followed God’s leading through several professions, always seeking to honor God, support missionaries, and teach God’s Word. He regularly travels to Africa to teach God’s word to individuals who have little or no access to Bible training.  We kids used to look at my Dad’s first Bible, which was so inscribed with notes and highlighter marks that we called it the “Coloring Book Bible.”  All of his letters to me have encouraged and exhorted me to know God more.  In his most recent one, he wrote, “Encourage each other daily toward the goal of letting Jesus be right at home among you.”  His teaching has focused upon putting God at the center of our lives.  All of his parenting was deliberately focused on showing us God’s love for us.  His marriage to my mom put my Christ at the center.  His emotions showed me that he had a tender, teachable heart.

Now, my dad was not perfect.  Nor was he some sort of tyrannical despotic fundamental Christian. Some of his methods failed.  Some of his teachings didn’t stick.  Some of his beliefs we challenged.  Some of his footsteps we walked in. Some we didn’t.  But he didn’t then and hasn’t since given up following Christ.  He hasn’t stopped being teachable.  He hasn’t stopped seeking opportunities, however small, to honor God.  While there are many things that I cherish about my Dad, this is the one that I love the most.  There are SO many more things I could write about, but you’ll just have to get to know my Dad yourself.

Dad, thanks for giving your life over to Christ and teaching me to do the same. I love you!