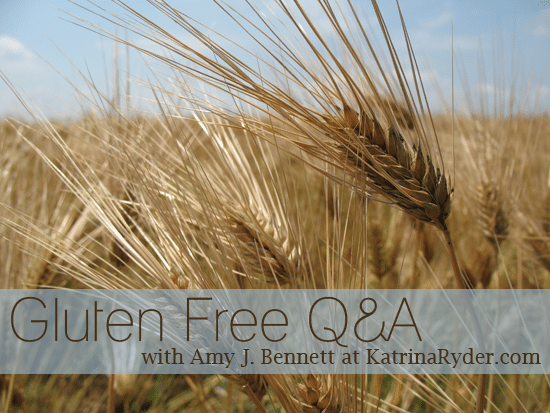 Today, I’m really excited to be hosting a Q&A with an online AND in-real-life friend, Amy Bennett, who hosted me a few weeks back for my embarrassing Cheetos confession.  She joined me and a group of other bloggers for Summer of 7 last year.  Since we both live in the same area, we decided to meet IN REAL LIFE.  At the restaurant where we met, I quickly found out that she’s gluten-free. Since this meant that I got to eat the entire basket of bread for both of us, I didn’t hold it against her and we became fast friends.  Her explanations of the gluten free lifestyle made a lot of sense to me, so she was my go-to lady for this post.

Thank you so much for having me!  I’m quite passionate about the gluten-free lifestyle and love to share what I’ve learned in my journey. I have seen nothing but positive results in myself, friends, and family and hope this post will help clear any confusion and provide a pathway for you to find healing.

What exactly is gluten anyway?

Gluten is a protein complex found in wheat. It’s also found in other grains like barley and rye.

Why is it so bad?

Here’s my non-scientificy explanation (experts, explain this better for us): if you are sensitive to gluten, your body produces antibodies against gluten but your body gets confused and the antibodies begin to attack good stuff in your body like your thyroid or heart tissue.  Your body literally attacks itself.

It is thought to be the cause of some auto-immune diseases like Alzheimer’s and can cause weird things like pain in your joints or the more common stomach issues.

My mom experienced very bad skin redness, swelling and burning around her eyes until she went gluten and dairy free.  Here’s a great article on even more reasons why it’s bad.

Is gluten bad for everyone?

Well, it depends who you ask.  Some make the case that no one should be eating any grains at all since they are genetically modified. (Katrina’s note: WHEAT is NOT genetically modified at this time; however, almost all processed wheat products contain soy and corn derivatives, which usually are GMO.)

However, the more straight-forward answer is no, it’s not bad for everyone.  There are those that have celiac disease which causes major problems and then there are others that are just gluten sensitive.  My family members and I are all gluten sensitive.

How did you find out you were gluten sensitive?

I have the full story of how I came to know I was gluten sensitive through my daughter’s issues on my blog but basically I was tested (non-traditionally and non-evasively) by a doctor in Georgia.  I actually don’t know the exact name of the test, but it uses your reflexes.

You can get blood tests from your traditional doctor but I’ve heard it’s not entirely reliable, especially if you are already off gluten.

Okay, I’m being honest here. That sounds like a slightly uborganic alternative medicine conspiracy.  Are you REALLY sensitive?

I hear you.  It’s kinda weird at first but my entire family has seen serious results. I wasn’t really sure if gluten actually affected me but after I removed it from my diet to support my daughter, I realized looking back that gluten really was the culprit.

So what can’t I eat?

The biggest hit to your diet will probably be bread.  You can’t have any traditional breads or any traditionally baked goods such as cakes, cookies, pies, muffins, bagels and pizza.  There is also hidden gluten in processed food.  It’s in weird places like soy sauce, teriyaki sauce, seasoning on chips or nuts.

Are you saying I can never have a cookie again?

No, the good news is the food industry has picked up on the gluten-free lifestyle and has an abundance of gluten-free substitutes.  I have a handy list on my blog of some of our favorite substitutes.

How can I tell what has gluten in it?

Wheat is listed as an allergen on processed foods so that’s the first thing I look for.  Then, I usually go back through the ingredient list and look for wheat, barley or MSG. All meat, veggies, fruit and plain nuts are naturally gluten-free.

Am I going to lose a lot of weight?

Some people experience weight loss because they move to a whole foods diet but gluten-free substitutes can be full of sugar.  I bought some chocolate cookies once during Girl Scout season and realized it had more sugar and fat than the Girl Scout cookies!

What do you do when you go out to eat?

Many restaurants will provide a gluten-free menu or you can ask the chef if something is gluten-free.  In general, I eat a lot of chicken, beef, salads, veggies and potato-based sides like french fries, baked potato,or sweet potato fries.  On my site, I have a listing of some of my go-to items at fast food restaurants.

Eating gluten-free doesn’t mean you have to buy expensive gluten-free products.  We only buy a handful on a regular basis.  The budget issue is similar if you were moving to a whole foods diet. I’d recommend buying fresh foods when your supermarket has it on sale or marks it down and the budget-friendly standbys rice and beans are both gluten-free.

Katrina’s note: Here’s a whole post I did a while ago with my friend Shelly on how to eat gluten free poorganically!

How soon will I be able to tell it’s working?

Many people I’ve talked to can see a difference in a week, particularly if you have a lot of bloating when you eat.  However, I’ve also heard it can take up to a year for your body to fully rid itself of gluten’s effects.

What happens if I cheat?

I mentioned my sister has dealt with food allergies her whole life.  Allergies were always explained to me like a bucket.  You could slowly fill it up but at some point, it would overflow and that’s when you got a reaction.  That’s why some people can tolerate a small amount of an allergen but can’t eat a lot of it.

Gluten is not like that.  I didn’t come up with this analogy, but I don’t remember who to credit, so forgive me.  They explained your body like a big football field with a bunch of small mouse traps set.  If you were to throw a ping pong ball, one trap would be set off, which would cause a whole lot of other traps to go off too. That’s what gluten does—even a small amount eventually causes a big reaction.

You really shouldn’t cheat on a gluten-free diet—it’s all or nothing.  However, as I’ll explain in the next question, my husband has found that he only experiences his reflux when he eats a lot of gluten during the day.  He has learned how to manage that on his own.  Still, you have to wonder what it’s doing internally even if he can’t physically feel the effects.

What about your kids?

When we first went gluten-free, only my husband, my oldest daughter, and I ate gluten-free.  I made all our dinners gluten-free because I wasn’t going to cook two meals.  My youngest daughter never realized what was happening.  We were never big on anything fried or serving bread anyway.  I’d say the biggest impact was the pasta, and honestly, I prefer the gluten-free noodles.

I think my daughter would say she hated missing out on special treats the kids would bring in to school, but I did try to bring alternates when I knew to expect them.

After some time, my husband gave it up.  He realized that he could eat a small amount of gluten before his reflux returns, so he just manages that on his own.

About 8 months into it, I started letting my oldest daughter have gluten again.  I did this because it IS a bit of a pain when she goes to school or friend’s houses and has to watch what she eats. I didn’t want her to worry about that.

BUT, her stomach aches have returned, and my youngest daughter’s have become more frequent.  As a result, this summer I removed them both off of gluten again.  Since we’re home 99% of the time, it hasn’t been that big of a transition.  They both see the difference between eating gluten-free and not.  They agree that avoiding it will prevent them from having stomach aches.

The biggest issue with the kids is fixing a fast lunch.  Normally, we’d stick to our PB&J’s but no one really likes the GF bread. I have to prepare ahead of time for things like homemade soup, salads and baked potatoes or just serve leftovers from the night before.  It works, but I admit it is time consuming.

All in all, it’s worth at least trying if you are thinking gluten could be causing an issue.  It’s confusing at first, but once you find your new normal, you almost forget you’re on a special diet.

What other questions could I try to answer?  Gluten-free friends, what information would you add?

Amy Bennett is wife to her police officer husband, Scott and mommy to two girls, Emma and Lexi. They reside in South Carolina with their two dogs Bella and Tucker and a picket fence to hold them all in.  Amy spends her day writing code for a bank and her evenings writing about faith, parenting and homemaking at AmyJBennett.com.