First, a few clarifying details about the $500 month just for those of you who are curious or are trying a similar thing. 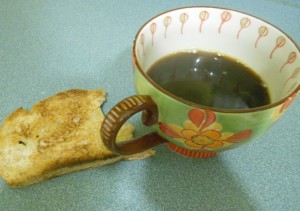 Please don’t judge me. Or do. GO AHEAD. I can take it. My husband suggested Subway after he saw me give my weary “Please don’t make me cook for these terrible kids after that church service.” (We are church shopping, which is a dreadful wearisome process much like dating. Try taking your extremely shy three year old to four different churches in as many weeks, and you might have a clue.)

I said okay and he ordered. I forked over the cashola, $16 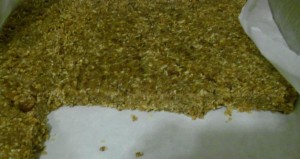 Homemade Lara Bars. Those of you who asked for the recipe should NOT follow the method I am going to describe below.  You should Google it for more sophisticated information, but here is what I did.

For the first batch, I took a bag of leftover trailmix that had peanuts, raisins, sunflower seeds, etc (probably about a cup) and pulsed it in the mini-chop food processor till it was like fine bread crumbs.  Then I added some dates one at a time, pulsing until it was a thick pastey consistency. Then I pressed it into wax paper and left it in the fridge till I could cut it. 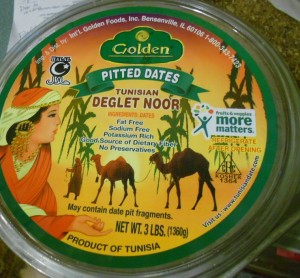 Since that worked pretty decently, I took some post-fresh granola (oats, unsweetened coconut, chopped nuts, etc.) and pulsed it until it was crumby. Then I added dates to it in batches till it turned thick and pastey.  I did this in batches until smoke started coming out of my little food processor.

Then I dumped the food out and cleaned out wheezing, smokey processor. I tried again until I smelled the smell of burning metal. Then I tried to pulse again until I heard the sound of a lawn mower running over an anvil. Then I stopped.

I put the mixture I had finished in wax paper in a pan and refrigerated it till it was firm enough to slice.

So, all that to say, I think you can mix dates with about anything and turn out a fruitylicious treat, but your appliances might be in jeopardy. 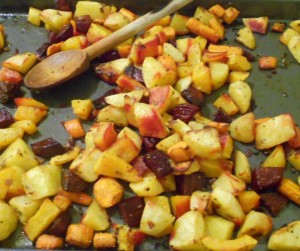 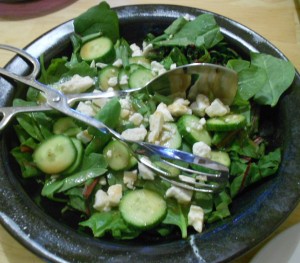 As penance for feeding my kids “pink meat combo” and killing our appliances, I made these delicious ALL organic roasted veggies and ALL organic spinach and beet-green salad with homemade vinagrette.  I even used my one butternut squash that I grew in my garden, despite having an almost entirely unsuccessful summer of growing anything.  I would

estimate this dinner cost about $10 or less.  Although actually, I put the price of that butternut squash at around $40 since it is almost the only thing that I managed to grow. 🙂

Truthfully, my littlest two were not as psyched for it as they had been for Doritos, but they ate some of it and only cried for a few minutes when I refused to give them anything else after dinner.  (So in addition to being a bit of a food-hypocrite, I’m also really mean.)

Anyway, that was day 2. Breakfast we did okay. Lunch we did terrible. Dinner we did awesome. I guess being poorganic means averaging out the poor and the organic by the end of the day.  We are almost a $100 down already, but I’m determined to menu plan tomorrow. What’s on my menu? Please help me. I’m weak.

Are you having fun laughing at my expense? Invite your friends to follow along with the $500 month too. 🙂