I thought it was time that we read this little treasure again because some lessons just don’t get old. This post originally ran in June 2010.


This year I am trying to be a gardener. I have to tell you, it is not going well. We have a wooded lot, so I am fighting nature, literally. We don’t have many areas that are sunny and those that we do have are, well, the driveway. But I refuse to be deterred. I have planted and had, um, moderate success. We ate buttercrunch lettuce and arugula from the garden. The broccoli and cabbage seem to have given up the ghost, but there is a chance I will be able to get a few small . . . florets? Nevermind that I have busted my hiney out there hoeing, pulling weeds, trying to kill slugs with beer pools, caging off bunnies with chicken wire, and sprinkling Dylan’s recent haircut fuzz to drive off deer. I am sure that it will be worth it.

But the main thing is, the tomatoes.

I planted the tomatoes in pots so that I could move them around to follow the sun because I am DETERMINED to have tomatoes. They are summerness in a juicy red morsel. Three of my four tomato plants are cherry tomatoes, but one is Big Beef.

He became root bound in his tiny pot. Every day when it got warm, that dude just started wilting like an organic farmer in a Costco. Hmmm . . . so I determined that he had to get out of that pot. The Providinator and I dug a big hole and we planted him in it. To keep the deer off, we wrapped him in an old piece of fencing and propped his vines up on the cage.

Over the course of the next week, I realized it was a miserably un-sunny spot.  He needed to be back in a pot so that we could sun-chase him around, but of course, he needed a much bigger pot. Spying a huge, seemingly unused pot in my neighbor’s yard, I hatched a plan. My wonderful neighbor agreed that I could have it for Big Beef.

So earlier this week, I headed out there with a shovel. First I got the pot from my neighbor’s, hoisted out the tulip sapling inside that was totally infested with ants and some kind of maggots. Then I washed out the pot with boiling water and got some luverly new soil along the bottom. I headed over to Big Beef to lift him out, but I realized it would be tricky to hold the fencing open because it kept wanting to sproing back together.  The fencing was the inside of a roll and very coiley and had sharp cut-wire ends. Plus Big Beef was draped on it.  I didn’t want him to fall off and drop his tomatoes or break a vine.

So to my peril, I pried open the sproingy death trap and shoveled while getting little scratches all over. Finally I loosened Big Beef up. Then I gingerly maneuvered the plant, the pot and the cage together, trying oh-so-carefully to gently hold the roots and not break a vine or a leaf or a stem.

And then I dropped Big Beef on the ground and broke some of his branches.

I was very frustrated, yet 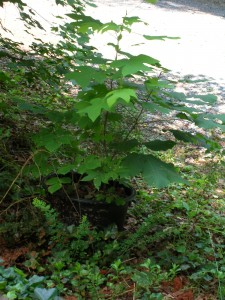 I lifted him back into his new pot, I put up a new cage and replanted his sweet little marigolds around him to keep bugs off. I filled his pot up with more luverly expensive soil and watered him with Miracle Gro and set him right in the sun. Yesterday when Dylan had his haircut, I sprinkled the human smelling yellow Dyl-fuzz all over him to scare away those munchy deer (who dastardly devoured my lovely Husky Cherry that I got for mother’s Day-BEASTS!)

I am worried about Big Beef.

I want him to grow big red juicy tomatoes, but maybe because I don’t know what I’m doing, he will die. 🙁 Will he die? Don’t tell me if you think he will. I will tell you if he does. But I will be very sad.

While I was working my tail off trying to get Big Beef moved to the perfect place, I felt God saying to me something along the lines of . .

“Katrina, this process of gardening . . . this is what I do you with you. And, unlike you, I DO KNOW what I’m doing.”

“When I want you to bear fruit, I go to even greater lengths to put you in the perfect conditions for growth. I prepare and clean out the places I plant you to make sure there aren’t gross maggots or diseases. I try to protect you from influences and people that harm you. I nourish you with my Word and my presence. I prune away habits and behaviors that sap your strength. Your time and effort cultivating this tomato cannot even compare with how I feel about you. I didn’t buy you at the store and plant you. I MADE YOU.”

“But you have free will, so that makes my job even harder because even though I won’t drop you, you could let go of me.”

So I’ll probably be thinking about that every time I go check on Big Beef. . . .

Here’s a couple of passages that He brought to my mind . . .

Live in me. Make your home in me just as I do in you. In the same way that a branch can’t bear grapes by itself but only by being joined to the vine, you can’t bear fruit unless you are joined with me. 5-8“I am the Vine, you are the branches. When you’re joined with me and I with you, the relation intimate and organic, the harvest is sure to be abundant. Separated, you can’t produce a thing.

By their fruit you will recognize them. Do people pick grapes from thornbushes, or figs from thistles? 17Likewise every good tree bears good fruit, but a bad tree bears bad fruit. 18A good tree cannot bear bad fruit, and a bad tree cannot bear good fruit. 19Every tree that does not bear good fruit is cut down and thrown into the fire. 20Thus, by their fruit you will recognize them.

But his delight is in the law of the LORD,
and on his law he meditates day and night.

3 He is like a tree planted by streams of water,
which yields its fruit in season
and whose leaf does not wither.
Whatever he does prospers.


For you created my inmost being;
you knit me together in my mother’s womb.

14 I praise you because I am fearfully and wonderfully made;
your works are wonderful,
I know that full well.

15 My frame was not hidden from you
when I was made in the secret place.
When I was woven together in the depths of the earth,

16 your eyes saw my unformed body.
All the days ordained for me
were written in your book
before one of them came to be.


But blessed is the man who trusts me, God, the woman who sticks with God. They’re like trees replanted in Eden, putting down roots near the rivers— Never a worry through the hottest of summers, never dropping a leaf, Serene and calm through droughts, bearing fresh fruit every season.

Have you learned anything in the garden this year?