I’ve been on an “Eating Poorganically” shopping frenzy lately. I’ve gotten a little confused with the weekly spending allotment and the budget because of starting EP in the middle of one of our summer months, when we had been eating normally.  I should have waited to start EP with a new budget, but alas, I did not.

For those of you reading The Low Ryder who are just joining for Eating Poorganically, I’ll give you a little explanation. My husband is a teacher and is not paid in the summer, so once that end of summer payday rolls around, we are in the MONEY. Well, not exactly. But you get my drift.

Here are the fig-ahs. (That was a British accent. Could you tell?)

We finished the summer within our $500 a month consumables budget having spent $500.89 on our groceries and household items.  We started Eating Poorganically in the middle of that month, so I am not totally sure what our food and non-food breakdowns were, but I am keeping track of that now.We also went on vacation that month during which we cooked out own meals, so I am pretty pleased with that number.

Anyway, Week 3 we spent $98.94 on poorganic food, which is somewhere in that above number.  Here are some photos, but I don’t have everything because I am a slouch and sometimes the ProvidinaTOR gets irritated at me taking pictures of our food, which admittedly, is strange. (Not the food–the photographing it.)

Obviously, I don’t have pictures for everything that I bought Week 3, which included $16 worth of plants and seed that I purchased for our garden. There were a few other trips too.

Due to some payday confusion and some binge buying, I am putting these weeks together.  Also they will be the beginning of the first OFFICIAL month of Eating Poorganically.  If you recall, we are trying to eat for $85-$100 a week, or at the very worst, no more than $400 a month.

It is hard doing this.  Here’s a few more pictures  . . . after which I will offer up some pathetic excuses. 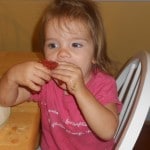 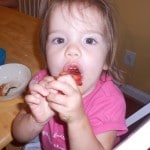 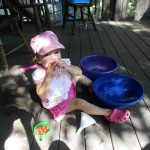 That’s all the pictures that I have, which isn’t all of the $226, but it gives you an idea of what my shopping trips have looked like! Here are a few observations . . .

a. We are eating well, but whether it is growth spurts or ease of digestion, my kids are CONSTANTLY eating.

b. I am shopping a lot. This is probably because we are eating so much produce that I keep running out to get more.

c. I am cooking more . . . bread, granola, scratch biscuits. I don’t mind it yet, but it might get old. What will we do then?

d. The kids are surprisingly un-phased by the lack of processed and convenience food. Even though we don’t really have crackers or granola bars anymore, they seem to be fine with cut up fruit and yogurt with honey. All of them are really starting to get into hummus, especially when I put black beans in it. (Recipe to follow in another post.)

As for the $226 we spent in two weeks, I know the weeks got kind of screwy somewhere, so I think I might just abandon the week notion and stick to a running tally of where we stand for the month. I hope that doesn’t mess you up too much. Also buying that beef really messed with the total.  Since that meat will be for the whole month, I’m not focusing on the weekly problem.  We still have $174 for the rest of our month, which is about three more weeks. Even though we haven’t come close to spending so little thus far, the shopapalooza means that we are pretty well stocked. I’m hoping that the $174 will be spent almost exclusively on produce and milk.  We are planning to go apple picking this weekend, so all our meals might have apple in them for the rest of the month.

Any questions or things that you are specifically wondering about? What are your reactions so far? Should we keep it up? Is this worth it?